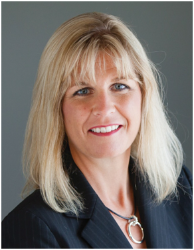 Liz Bavitz, originally from Bridgeport, Nebraska, has lived in Lincoln since 1993.  She is a registered Architect and a Principal Owner of Sinclair Hille Architects.  Liz has over 28 years of professional experience in the architecture field and currently serves as a Project Manager for several projects for the firm.  A graduate of the University of Nebraska-Lincoln College of Architecture, Liz was named a 40 Under 40 Award Winner by the Lincoln Business Journal in 2007.

Married since 2016, Liz and her husband Bruce met through friends and enjoy spending time with their blended family of five, traveling, cooking, and working on their 1928 historic home.  A huge fan of all types of music, Liz loves to listen to The Raw Nerve, an all dentist band from Lincoln of which Bruce is a founding and current member.